Welcome to the Chart!

Want to know which other queer roles that actress you liked in that show has played, but you don’t know where to look?

Or maybe you’re just interested to find out how wlw characters can be linked to each other, just like Alice from The L Word used to try and connect every girl from the queer LA community?

Well, you have found the right place!

Explore the Chart and discover the connections between the characters, search and find your favorite characters, actresses or shows, vote for the characters you think of as iconic... and share your thoughts with the community in the Discuss section below!

Make sure you check out the menu for more information on the projet and all the different ways you can find what you’re looking for.

The Chart is a network of queer female characters in TV shows; its main purpose is to show how they are all connected to one another.

They are all linked by either:


Note: We are aware that not all existing queer female characters are on the Chart. It's a long-term job and names will be added regularly.

The history of the Chart

The Chart started as a small, personal project: it was a simple prop idea for a convention photoshoot.

Back then, the question that popped was: is it possible to connect every tv show queer female character one way or another? (spoiler: the answer was yes)

Of course, that was clearly a tribute to Alice Pieszecki’s iconic Chart from The L Word. She used to try and connect every queer woman from the Los Angeles LGBTQ community, based on who had slept with whom, to prove that every girl could be linked to another in just a few moves.

And just like that, the very first Chart was created!
It was designed on Ilustrator, printed on a card board and taken to many conventions where it got signed by several actresses whose characters were featured: 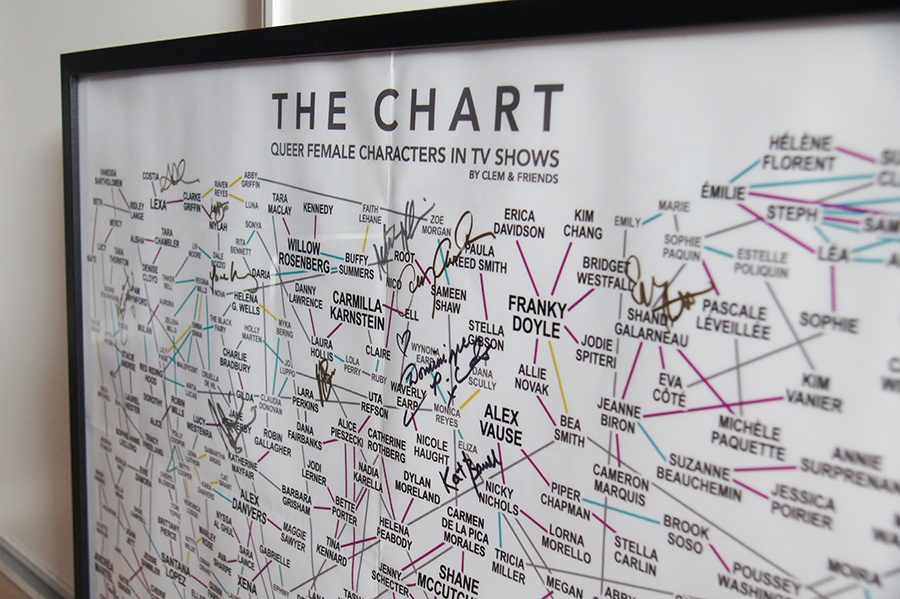 It was really a baby Chart at the time... of course it didn’t stay that way. It grew and grew as more characters were added, until it became really complicated to update.
So the next logical step was to turn it into a website so that it could keep growing without restraint!

How to use the chart?

You can use the Chart a few different ways:

1. Navigate with your mouse

Use your mouse to zoom in and out, drag the network, click on a name for more information on the character, move names around...

In the character popup, you can click on any character name or show to reveal it in the Chart.

Use the filters in the caption box to interact with the Chart! You can:

Use the Search section in the menu to find a specific character, actress or show.

Don't forget to vote vor the most iconic characters when clicking on a name on the Chart–once they have had enough votes, they will appear bigger than the others!

Want to go faster?
Directly seach a character, actress or show below and reveal it on the Chart.


Can't find what you're looking for? It's probably already on our (long) list and will be added some time in the future.
Subscribe to the newsletter and follow us on Twitter to be notified when the Chart is updated!

Want to be notified when characters are added to the Chart? You can:

If you'd like to make a donation to support the work that is being done on the Chart and help pay for the hosting of the website, you can do so by clicking here:

Every amount is appreciated, no matter how small!

Feel free to send us a message for any question or issue you might have on the website, or to report a mistake in the characters or links.